When I inherited a slew of quilting pattern books, I eagerly flipped through the pages looking for inspiration, but found very little. Churn dash squares with brown calicoes on cream and bear paws in maroon on black hardly instilled an urgency to create with fabric and thread. But when my mother mentioned that dear friends of her and my father were going to be celebrating their 50th wedding anniversary, the inspiration fairy finally paid me a visit.

The LeBlancs met each other while he was in the military in something that seems like the plot of a Bogey and Bacall movie.  They were those type of young people who bucked the trend of having a long engagement and a huge church affair followed by a dinner with hundreds of their closest friends. They also bucked the trend of having a rocky road due to the swiftness of their courtship, but sometimes you just know your soulmate and anyone who meets them just knows they were cut from the same cloth as well.

I wanted to commemorate their fifty years of marriage as a joint effort, because frankly it was. I decided that the Flying Geese pattern in one of my inherited books would be a good platform to start my dive off of into a quilting abyss. My mother told me their home was decorated in warm earth tones with chocolate brown leather sofas, cream walls and natural wood trim. Someone queue those calicoes. So two sets of fifty geese were sketched into four columns of 25 geese each, and spaced with a column of the background fabric and another set of columns in a low volume print to add more width to the quilt, and bordered with what seemed like a billion tiny 1.5″ squares made out of the geese fabrics. It was a clean, uncluttered plan of attack–almost modern.

A trip to a chain fabric store (the only option I knew of back in 2005) yielded a few sale finds of some rather non-traditional fabrics. My experiment a few years earlier with silk and denim and corduroy apparently had been a gateway to further debauchery as I took home copious amounts of micro suede in dark browns, a low pile tan velour, and a random, slippery knit. For the low volume (a term that I didn’t even know was a thing back then) columns, I found the perfect shade of tan with the tiniest American flags sprinkled like confetti on it as an acknowledgment of his years of service and the sacrifices she made during that time for their family. The geese and column fabrics all paired nicely with the vanilla standard cream flowers on cream background that seemed like the mandatory quilt background at the time–the store had no less than five bolts of this stuff and I am fearful to say that I still have a large stash of it to this day… But I got even with “traditional” when I decided to be utterly ridiculous in my backing fabric choices and splurged on a sumptuous chocolate velour with a delicate gold and burnt sienna orange flower print on it. That ought to teach those calicoes and vanilla cream flowers on cream who was a modern maker now. 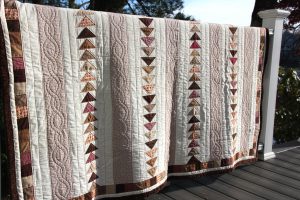 But still, I wasn’t so modern as to machine quilt my daring escape from the land of tried and true quilt patterns and fabrics as I hand quilted the whole oversized throw. I even made my own stencil for the cable pattern I sewed in the flags on tan columns. It took 14 months just to quilt it and the heft of the backing necessitated the purchase of a sturdy quilting hoop on a stand as my wrists were developing issues from using a free standing hoop with the weight of the velour along with the batting and quilt top. We quilters suffer for our art daily (just count the pin and needle stabs to substantiate that claim).

I pulled a mean trick of partially gifting the quilt in December 2016 during their 50th anniversary party that their lovely children threw for them–I felt awful gifting part of a gift only to have to yank it back to finish it. I finished it as quickly as I could with a full time job and new husband myself, and delivered it a few months later. It seems that all my quilts are gifted in winter months due to circumstances, but upon reflection, it also seems fitting as who needs a quilt in the summer really?

Curious as to how my hand quilting work was holding up after a decade of use, I asked the LeBlancs if I could take newer pictures of the quilt in December of 2015 since cameras had advanced well beyond the 3 megapixels they were at when I initially photographed it before the final gift delivery. I was not only pleased to see that the quilting had yet to break a single stitch after a decade of use, but gleefully noted that it had a food stain of some sort on a section of that vanilla cream flowers on cream fabric background–a truly heartwarming sight to know that it wasn’t tucked away in a closet somewhere, but was being used in a modern home with a modern family full of traditions that apparently include fighting over who gets to use the velour backed anniversary quilt during their visit.

3 thoughts on “Trading Traditional for Modern”